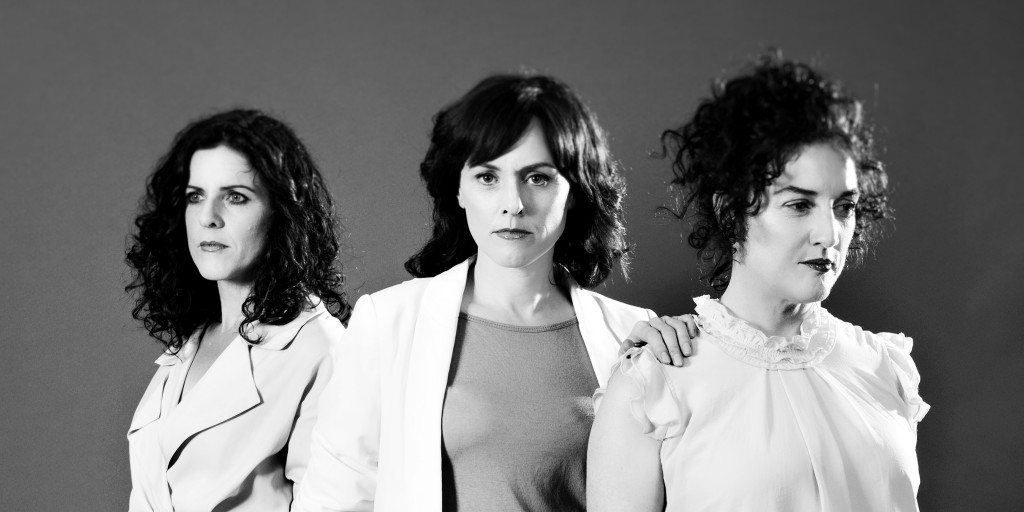 FNW spring 2016 of The Hayes Sisters at Lymm 21.02.16                                         The Hayes Sisters Lymm Folk Club 21.Feb 2016 I first saw The Hayes Sisters at Bury Met in the intimate Little Theatre in 2014. I’d gone to see Ducie, The Manchester-Irish Band featuring fiddle maestro Andy Dinan, and the three sisters – genuine sisters – happened to be the opening spot. At the end, I told them of my fine impressions of their set, then kept in intimate touch and last saw them at Middlewich Folk & Boat in summer 2014. I was more than eager to see them again, and hear of their forthcoming album “Another Man’s Shoes” due out this Spring. The line-up is : Cath Hayes – vocals, acoustic guitar; Ange Hayes – vocals, acoustic guitar; Jen Hayes – vocals, acoustic guitar and banjo. A change of venue to the local rugby club nevertheless provided an appropriate setting for their friendly audience interaction to flourish; I always feel an early connection to an audience is vital for performers. Their first set opened up with “Freight Train Blues” in which Jen’s banjo dexterity gave a real taste of Americana rolling across that land, vocal harmonies like a whistle over the Prairie. Ange’s self-penned number “Worth” concealed darker elements of daily drudgery in an openly more up-beat tune, with a grand arrangement bringing in her sister’s voices. This was followed by another song again crafted around more reflective lyrics: a tale of a poor soul in a shadowy place, our attention being drawn also by the harmonies and range of instrumentation. A further offering, the last in this “sound spell” of hints of the Americas, brought us a Latin, clappin’ rhythm Again. Jen’s lead vocals supplemented by those triple sisterly harmonies. Their next number really brought home to this listener the considered attention Cath brings to her lyrics, in a story set in occupied Paris in World War II, with a German officer falling for a French waitress. Here, Jen switched from banjo to guitar, gently reflective in music narration of the tales theme – and once more, those harmonies! Instrumentally woven into it one detected a Parisian lilt – akin to chimes – in the guitar picking. Notre Dames bells perchance? “Inside Out”, sung a capella,  eventually gave me a major essence of the trio which had first hooked me at Bury Met. A number with swing, Jen’s leading vocals paving the way, a paean of love with passion and personal desire pouring off the stage – and a palpable “hit” with the audience. The penultimate number before half-time, again written by Cath, a cathartic (sorry) shaking-off of weary working times. A slower gentle piece, Jen first with the vocals and each of this close-knit trio’s voices having a turn to shine. We ended this splendid presentation before the break with a Johnny Cash song,  introduced by Ange with an anecdotary preface referring to her day job and an unfortunate patient’s haemorrhoids – yep “Ring of Fire”! And we all joined in in unfazed. I had meant to cease furtive scribblings and sit back to absorb the second half, having enough revue ramblings in the bag. However, I couldn’t help breaking my intentions, so impressed was I by certain songs which followed.  It opened with “The Wrong Way”, a tale of a true love’s travels, and a sound-plus-theme which quickly put me in mind of Scolds Bridle. Jen then lead the way in specifically treating a certain FNW scribe to “Four Loom Weaver”; Ange came in, then Cath. Totally unaccompanied, which in my mind was how I carried for a couple of years what had instantly and with mighty impact lodged with me from Bury Met when I sensed a sure, knowledgeable and respectful connection with the tradition of Folk. However, Jen assured me there had been the discreet backing then of Andy Dinan’s fiddle: how the passing months mist the mind! We heard about the story of “John Axon”, a ballad of a Derbyshire rail disaster, with the compact harmonies relaying the lonesome locomotive’s call in this account of tragedy. “Norwegian Wood” entertained with a faithful and complementary cover of this Beatles’ standard – but, audiences, beware “premature appreciation”! For my money, the most powerful and impressively lasting song of the evening carried “I can’t love you” as a  haunting, plaintive refrain woven into the number “The Mistress”, like the key notes in a thrush’s tree-top trill. A tale of the bitter and heart-wrenching consequences of addiction: Jen’s voice reigned supreme. Following closely on from Caribbean riffs of the “Don’t worry ’bout a thing – every little thing’s gonna be alright” variety, the final number was presented in a neat package of Spanish-guitar and language. And one certain lesson of the evening, via Jen’s misfortune : any Kazoo “players” – check the membrane for holes before the gig!  I was reminded of the recollective musical tastings when I encountered them at Bury, with sounds suggestive of The Roches and The Rankin Family. But, all praise to, “The Hayes” – a sound, live arrangement, stage presence and performance with their very own distinctive style and entertainment. What one heard, appealing so strongly, was their undoubted simple enjoyment of three sisters singing together and relating to a responsive audience. This no better defined than when Jen took up banjo to kick off “Whiskey in the Jar”. The ever-attentive FNW reader will have detected that this reviewer has lapsed in confirming the names of each song, despite subsequent research! Apologies all round, but therein follows a reason for us all to catch an upcoming gig. Keep an eye out for their album, and herewith is a cast iron recommendation to club, concert and festival organisers to book them and get them in place as early as possible, as they’ll put a smile on many, many faces – because they themselves perform with a smile and a laugh.                                                                     Rob Dunford 29.1.16